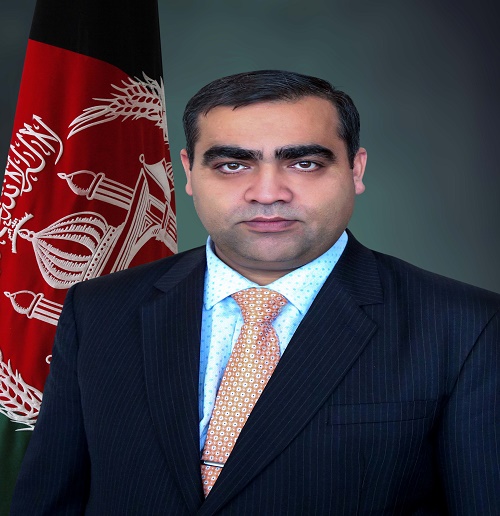 Mr. Yamma Shams is born in 1980 in a well-reputed family in Kabul, Afghanistan.

In addition to many specialized trainings from different international organizations, he has a Master’s degree in Business Administration (MBA) from the International Institute of Management in Delhi, India. He has earned his bachelor degree in Political Science from Baluchistan University in 2005 and has diploma in Computer Science.

Mr. Yamma Shams started his professional career in the government of Afghanistan back in 2004, providing advisory support to the leadership of the Ministry of Urban Development and Housing (MUDH) and the local governance of Kandahar Province. Two notable accomplishments during the era attributed to his supporting role in drafting the 1st generation National Development Strategy (ANDS) and the foundation of an Information and Technology oriented training center for the capacity development of Afghan women with the support of international partners in Kandahar Province.

In 2005, Mr. Shams returned to Kabul, where he joined MUDH in the field of capacity development, program development, project management, and representative of Ministry in High Commission of Disarmament, Demobilization, and Reintegration (DDR). Following his productive performance in the government, in Sept 2005, he was promoted to serve as the representative of the Ministry Public Works (MPW) in Parliamentary affairs, as well as, strengthening coordination and collaboration between government entities and International Partners. His leading roles and responsibilities attributed to the enticement of investment and grants for the infrastructure development of Afghanistan.

In 2007, he promoted to serve in MPW as the senior advisor for financial and administrative affairs. He was working with the Ministry in the areas of capacity development, financial and economic analysis, monitoring from the implementation of projects and programs, and managerial activities.

In 2008, Mr. Shams promoted to serve as the head of the Reform Implementation and Monitoring Unit (RIMU) of the Ministry through Independent Administrative Reform and Civil Services Commission (IARCSC). His efforts are earning him notoriety in accomplishing major Reforms in the areas of capacity development, system development, institution development, strengthening coordination, and collaboration between donors. Leading the reform program through charting a holistic reform package to address critical institutional gaps resulted in some restructuring, such as the establishment of Human Resource Directorate, and the Directorate for Railway.

In 2010, Mr. Shams promoted to the position of Director of Capacity Development within MPW. Jotting down some copious amount of accomplishments upon his professional career, he was the primary benefactor in establishing the Railway Authority, the Afghan National Laboratory in liaison and consultation with the Senior Advisory Office of the President in infrastructure development affairs. Institutional development for transit-related relations resulted in increasing the state revenue and elevating the budget expenditure efficiency, the reestablishment of Work Force (Quaye Kaar) Directorate for emergency maintenance activities, and close liaison with donors and international partners in various areas associated with capacity building.

In 2012, considering his remarkable achievement in institutional development, he promoted as the Director of Railway Authority within the structure of MPW. His main accomplishments in authority elucidated in developing an overall structure, 25-years development plan, formulation of the railway law, regulations, and procedures, and the implementation of over 3,200KM feasibility studies, survey, and design in accordance with the railway development plan.

In 2016, Mr. Shams’s remarkable struggles transformed Afghanistan Railway Authority to an independent Authority led to increasing the state revenue in the railway sector, attaining membership from notorious organizations such as; CoTIF, ASEAN, OSJD, UIC, and the implementation strategic railway projects for Afghanistan like Hairatan-Mazar, and Torghondi-Aqina. He entrenched a cordial relationship with Afghanistan’s trade and transit partners, especially central Asia.

During his tenure, he as the state representative for the transport sector of Afghanistan, in particular, Railway traveled to many countries and strived to entrench a solidified mutual relationship for the proliferation of trade and transit within the region. Various MoUs, Agreements, and contracts signed with Afghanistan’s joint partners, in particular, the middle east to promote trade and transit and alleviate the dilapidated economic situation of Afghanistan. Besides, the opportunity for furthering education for hundreds of Afghans paved with his remarkable leadership and sectoral maneuvering.

Mr. Shams, as the representative for the Transport Sector of Afghanistan, participated in many national and international programs and conferences. Inflating sectoral image in the international arena, strengthening the sector from the lessons learned international practices, good governance, and identifying the investment opportunities in the industry remain as underlying objectives of him in such events. Also, Mr. Shams traveled to countries like the USA, Japan, France, Singapore, China, Belgium, India, and various other countries to attend seminars, specialization programs, and training.

He received several acclamations from the government leadership associated with his remarkable achievements in development of the transport sector. In 2017, he was honored by His Excellency, the President of Afghanistan, with the high statesmanship medal of Mir Masjidi Khan.

In 2019, the government leadership made him responsible for leading the National Road Authority of Afghanistan. In Jan 2020, in addition to his current incumbency, he was promoted to serve as the Minister of Transport of Afghanistan.